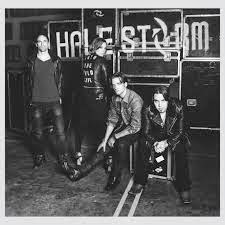 I'm loving that so much good music has come out in 2015 and especially this month. And we're only halfway through April. Partly because of that, I've been inspired enough to post six times on this blog since last Wednesday.

I'm loving the new Halestorm album that came out Tuesday, Into The Wild Life. So much so that I haven't had a chance to check out any other new music that came out.

"Bad Girls World" is almost 70s R&B. And I can't help but thinking of Donna Summer when I listen to it.

I'm loving that there are new bands out there making 80s style hard rock. Two of which are going to have albums coming out soon.

Here is "Seal the Deal" by the Australian band Koritni.

It took a few spins, but I'm loving the new Will Hoge record Small Town Dreams. This one, "Middle of America". sounds like it could have right off a late 80s/early 90s John Mellencamp record. It's being marketed as country. I can see that, I guess. Posted by Michael Rauch at 8:45 PM