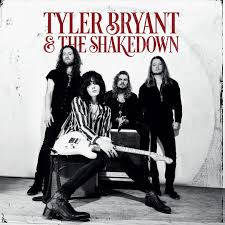 Tyler Bryant and the Shakedown's self-titled album is their fifth release and second full album. It's an eleven song piece of real hard rock, swampy, groovy, bluesy and guitar-heavy.

Tyler Bryant grew up in Texas and moved to Nashville during his senior year of high school. The Shakedown is comprised of drummer Caleb Crosby, bassist Noah Denney and guitarist Graham Whitford (son of Aerosmith guitarist Brad Whitford).

With this self-titled release, Tyler Bryant and the Shakedown seem to have found their niche, deftly combining the blues, swamp and heavy rock with a touch of Alice Cooper creepiness and Aerosmith (of course, right?). Sonically the album is great.

Vocally, well, Bryant doesn't have the best voice in the world, but it works. See the Alice Cooper reference above. His voice exudes the right emotion and passion on every song.

This is another great example that rock isn't dead if you want to find it.

Here is the official lyric video for "Heartland":

And here is a live acoustic version of my favorite song from the album "Ramblin' Bones":