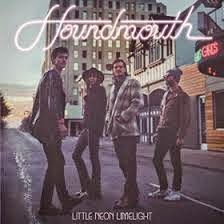 I first became aware of Houndmouth a little over a year ago when I stumbled upon their album From The Hills Below The City, which had come out sometime in 2013. I fell in love with their songwriting and storytelling.

They have taken it to a new level with their latest release Little Neon Limelight. Each song is so well-crafted. Each song tells a story.

I guess it's a result of the time that I grew up in, but I like to hear an entire album. I grew up in the cassette era, which was probably the least accessible time for singles consumption. Of course there were the "cassingles" which many times cost almost half of what the full cassette would cost. We bought the whole thing, usually. And there was no skip function on cassettes. So we usually listened to the whole album.

All that being said to make this point. Little Neon Limelight is a record best consumed in its entirety. With the different members of Houndmouth taking lead vocals on different songs, and sometimes within the same song, you can't get a full understanding of what they're all about unless you listen to the whole record.

What kind of music does Houndmouth play? I don't know. Americana, country-tinged roots rock, alt-folk, all of the above? Doesn't matter. I'm done with genres. It's just good music. Listen to it. Enjoy it.

Here's a clip of the song "My Cousin Greg" that features all four members singing lead at times.