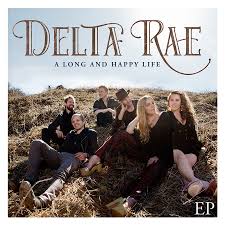 As the weather warms up in late March, it is the perfect time for light, fun music. With their latest EP A Long And Happy Life, Delta Rae delivers.

A Long And Happy Life is just four songs, but four very good songs. Including the slower, more introspective "No Peace In Quiet". The other three are fun, upbeat and perfect for the changing of the season.

Is there anything groundbreaking here? Nope. Just four excellent songs that I've had on repeat for the past two days. There is just something infectious about the songs and the twin lead vocals and interplay of Britanny Holljes (pronounced "Hole-Jess) and Liz Hopkins.

Do I prefer nine to eleven song albums? Yes. But if you're going to make a four song EP, do it like this or like Lindi Ortega's. Make sure every song is killer and you have my attention.

EP Spotlight: Lindi Ortega - Til the Goin' Gets Gone 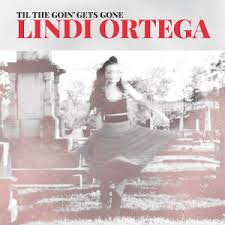 I first found out about Lindi Ortega and her 2015 album Faded Gloryville. A great album. With Ortega's latest release, a four song EP Til the Goin' Gets Gone, there is none of the quirky playfulness found on  Gloryville or her previous release, Tin Star.

Ortega went through some stuff, moved back to her native Canada, leaving Nashville behind. From what I understand, she almost quit music altogether. The four songs on the EP are dark, brooding, somewhat cynical, introspective. There is some real heavy stuff packed into a small package.

And you know what? This is Lindi Orega's best work. I don't know where she goes from here. Maybe it's a catharsis which leads to something else. Maybe it's a farewell. Whatever it is, it needs to be listened to and celebrated.

The closing song is called "Final Bow". I hope it's not.

I can't equate this to anything, really, but I hope it follows the same trajectory as Butch Walker. Afraid of Ghosts was similar in it's introspection and darkness, then followed by the upbeat Stay Gold.

Who knows what is in store for Lindi Ortega going forward, but we will all be poorer if this is the last music she makes.

I purposefully didn't go into specific songs. Everyone needs to relate to them in their own way, but every song will relate to you in some way.
Posted by Michael Rauch at 10:29 PM 2 comments:

There's not a lot I can write about Sunny Sweeney's latest album Trophy that hasn't already been written. But I'll do my best anyway. 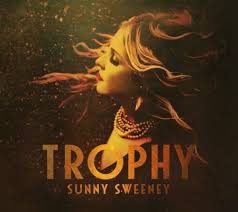 Sweeney dabbled in Nashville in few years ago and had a bit of a radio hit with "From A Table Away" from her 2011 album Concrete. Now shes' with the indie artist friendly label Thirty Tigers and back in Texas recording the songs she wants.

She had quite the co-writers on the Trophy, but the one constant is Sunny Sweeney herself. She co-wrote all but two of the ten songs on Trophy, one being a cover.

Sweeney's previous effort, 2014's Provoked is very good, but on Trophy, she seems to put everything together to give listeners the full Sunny Sweeney experience. The biting sarcasm and humor is there. The introspection is deeper and more pointed.

I have been quite critical of the trend lately to put 13-16 songs on an album, and then it seems like there is too much filler when a nine to eleven song album would have been great and leaving the listener wanting more. Sweeney does this. Trophy is ten excellent songs and then when it's over, you want more. I'm an album guy, so this is perfect for me.

As far as the songs themselves on Trophy, there is traditional country, there is some swamp, some Southern rock influence, but what resonates throughout is that it seems to be all Sunny Sweeney all the time. Sweeney is never going to be known for soaring vocal prowess, but her voice and vocal stylings fit perfectly in the context of her songs. That authentic Texas twang is not forced. It's the way she talks as well. Full of sass and vulnerability at the same time.

Go buy the album, whether by download or a physical copy. Support the people who make good music.

In October of 2017 it will be 40 years since Meat Loaf's debut album Bat Out Of Hell was released.

At that time, I was nine years old, so when it was initially released it had no effect on me or my musical tastes. Several years later, when I discovered what I really liked in music and started getting into hard rock, the revelation of Bat Out Of Hell was a game-changer. Not that it changed my taste in music, but that it changed how rock music could be viewed.

Was Bat Out Of Hell a rock album or a rock opera? Or did/does it even matter? Was it a concept album or a collection of songs that told stories? Was it both? Was it an epic opus or a story of teenage sexual repression and exploration? 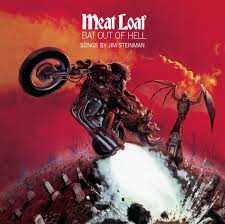 It was probably parts of all of that. Or none. But what it was, was something no one had ever heard before. What songwriter Jim Steinman and singer Meat Loaf (Michael Aday) did on that album broke ground in the rock scene that is still evident today.

I'm sure a lot of people re-discovered or found out for the first time about Bat Out Of Hell when Bat Out Of Hell II: Back Into Hell came out in 1993 with the big hit "I'd Do Anything For Love (But I Won't Do That), but even that was almost 25 years ago.

Meat Loaf and Steinman had a hell of a time selling this album 40 years ago in 1977. They'd have no chance now, although they could just record it and see what happens in 2017.

If you are vaguely familiar with Bat Out Of Hell, I would implore you to listen to the whole album. It may not be your thing, but there is no denying that it is one of the most unique pieces of American music in the past century.

Posted by Michael Rauch at 10:58 PM No comments: