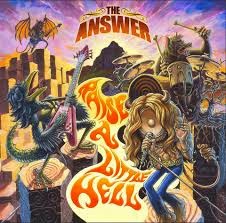 Sometimes you find a gem where you least expect it, or weren't even looking for it. Such is the case with the band The Answer. Someone suggested the song "Under the Sky". I liked it okay. It was some 80s-style hard rock.

Upon further investigation, that song was from their 2006 debut The Rise. Then I found they just released a new album in March of 2015 called Raise A Little Hell. So, of course I had to check it out.

The Answer definitely has some throwback elements in their sound. To what specifically, I'm not exactly sure. I hear Deep Purple, Stevie Ray Vaughan, Thin Lizzy, Black Sabbath, funk, power balladery, and 80's L.A. sleaze. And that's just scratching the surface.

Beyond the songs, what stands out is the individual musicianship. Of the four members, I don't hear a weak link.

So, hey, judge for yourself. Here is "Long Live The Renegades" from the new record:

Posted by Michael Rauch at 9:20 PM