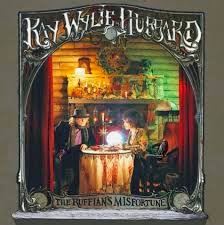 Here's the deal. Ray Wylie Hubbard is a legend of Texas music. He doesn't need me to spotlight his latest
album here on my little blog. But I will anyway, because if one person reads this and gets turned on to Ray Wylie, then it's all worth it.

If you like your music greasy, grimy, groovy, swampy, loose, in the pocket and real, then this if for you.

I'm done with genres, but if you want something, it's country, Americana, roots rock, Southern Rock and sometimes a bit punk. It's Ray Wylie.

I have seen on social media people praising each of the songs on the album, saying that is their favorite. And I can't argue with any of them. There's not a bad song there.

This is another in the long line of music that doesn't exist I'll be featuring here.

Here's a taste of the record with "Chick Singer, Badass Rockin'".

Posted by Michael Rauch at 8:18 PM