I'm not trying to save country music. I don't think country music needs my help.It may could use my input, but that's another story.

Saving Country Music is a website that I've been diving into the past few days. Very interesting stuff there.

I'm not a country traditionalist. I really am not much of a traditionalist anything. I don't necessarily agree with everything on this site. But what I really love about it is that it showcases artists who are not being played on radio.

It's more of a music (mostly country, but there is no box) lovers site. Sharing stuff that doesn't get recognized. I love that. Some of the music I like, some I don't. But in just a few days I've learned quite a bit and found some very cool artists that I don't know how I would have found otherwise.

If you are satisfied with what is currently being played on mainstream country radio and think that what is being played is great, you will not enjoy this site at all.

If you like some of the stuff currently being played but long for something more, think a lot of it is polished pop country crap, you will have a ball on this site.

If you think everything about current popular country music is horrible, well, you need help, but will find enough on this site to satisfy you temporarily.

If your favorite artists are Jason Aldean, Florida Georgia Line, Luke Bryan, et al, stay away from this site at all costs for your own well-being. Because it will throw you into a rage.

I think my two or three readers of this blog will like it. Check it out.

Here's a sample of some of the stuff you might find:

Posted by Michael Rauch at 1:16 AM No comments:

Roll With the Changes

The Cheap Seats are changing/progressing.

I'm going to try to post more often and that may be good news for the three people that read this. Or not.

There is going to be more music posts. Again, that is either good or bad news depending on your views of 80's hard rock and country music.

Just so you know.
Posted by Michael Rauch at 8:33 PM No comments:

The Dallas Cowboys: The World Has Ended (or not)

In the age of social media, it is almost as entertaining on facebook and Twitter as watching the actual games. Did we say "almost"? Many times it is more entertaining.

We are long time fans of the Dallas Cowboys. Some have given up. We have too much blue and silver in the veins to do that. But our happiness does not depend on them.

One facebook friend effectively "divorced" himself from the Cowboys after the debacle in Chicago. However, he was back for a reconciliation a week later, saying he couldn't stay away from the misery. Which gives us a good reason to link the following video (Any chance we get to promote good music.......)


So there's that. Another said it is hard being a Cowboys fan right now. Another posted pics of Tom Landry, Clint Murchison, Gil Brandt, Roger Staubach, "Doomsday", etc. Longing for the "good ol' days".

Twitter was a maelstrom of activity. Blame Tony Romo, the defense, Jason Garrett, Monte Kiffin, injuries Bill Calahan, Ron Washington. All had a hand in it. OK, maybe not Wash, but he gets blamed for everything else.

We root for the Cowboys each and every week. Hoping they win. But now that's not even that important. Do something to entertain us. On that coun,t they rarely disappoint. Go blow for blow with Peyton Manning and Denver? Check. Improbable fourth quarter comeback? Check. Inconceivable second half collapse? Check. Check. And check.

The defense is beyond horrible. The play calling is not much better. Romo will be Romo. Watch the games. Watch Twitter. Watch facebook. The best reality series out there.

We don't get depressed, angry or despondent after another Cowboy collapse. We turn to social media and smile. Because we just don't take it that seriously.
Posted by Michael Rauch at 6:24 PM 1 comment:

Farewell to the BCS

This is officially the end of the BCS era of college football. In 2014 we go to a four team playoff with the four teams determined by a selection committee. Good luck with that. 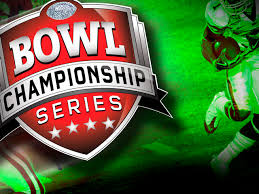 We were never fans of the BCS, but not for the obvious reasons. In our view, the BCS got it right more times than not in matching the top two teams in a game. Obviously, not without controversy. Auburn and USC have the best cases. But for the most part, it worked.

Our biggest beef with the BCS (aside the idiotic moniker, which we will explain later) is that it ruined New Year's Day. We realize now that television would have eventually done that, but the BCS accelerated things.

New Year's Day used to mean some parades in the morning while we cooked some sort of hangover curing concoction for breakfast. Then we had the Cotton Bowl along with some bowl games in Florida with good matchups. The Rose Bowl was mid-afternoon can't miss viewing. Then the Sugar and Orange Bowls capped off the night.

That was always a fun day for college football fans.

We were always a fan of abolishing the BCS for the reasons mentioned above, not to get a FOUR team playoff. That's just ludicrous. Four creates more controversy than two. Just look at this year.

Florida State, undefeated, would be in. Then everybody else has at least one loss. OK, a one loss Auburn as SEC champ gets in. Then what? Michigan State and Baylor are one loss champs of the Big 10 and Big 12 respectively. Alabama and Ohio State are one loss teams that are not conference champs. Two loss Stanford is really good. You make the call.

Eight teams is the way to go. In our opinion anyway.

We will leave you with this: BCS. Bowl Championship Series.

What a misnomer. There never was a series. Ever.

We always called the "BCS National Championship Game" the "BCS Trophy Bowl". Because that's what it has always been. A bowl game for the BCS trophy.

Next year, the controversy will not go away. It will just take a different form.

We still love college football.
Posted by Michael Rauch at 11:05 PM No comments: