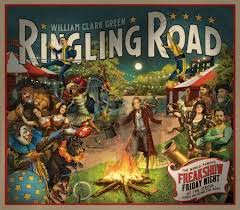 The new offering from Texas/Red Dirt artist William Clark Green is everything would expect from a good Texas/Red Dirt record. Country, raucous country, Southern rock. But what you also get from Ringling Road is a collection 11 very well-written songs, regardless of how you'd like to classify it.

The opening song on the record, "Next Big Thing", chronicles how hard the music industry is right now without sounding bitter.

"Creek Don't Rise" may be the most "country" sounding song on the record. And it's good. But that is followed by my favorite song on the album, the title track "Ringling Road" with its thinly veiled homage to the Grateful Dead song "Casey Jones". Or at least that's how I hear it, I have no insight, but with the lyrics:

That reminds of this from "Casey Jones":


Drivin' that train, high on cocaine, Casey Jones you better watch your speed.

"Ringling Road", the song, also is the kind of loose, greasy stuff you might hear from Texas legend Ray Wylie Hubbard.

I really can't find a bad song in the bunch. It's the kind of record you can just put on and listen all the way through.

Here is the first lyric video from the album, "Sympathy":