Time for another edition of Good Song, Bad Video. And this time I may have found the best/worst.

From Y&T's 1984 album In Rock We Trust comes the great song "Keep on Runnin'" accompanied by an atrocious video.

The video for this song, however, should live in infamy forever. You can't blame the band. Their part in this whole production was faux playing the song on a stage. It's the whole storyline, horrid special effects and bad acting surrounding them that make this cringeworthy.

The story is familiar. The nerd asks the popular girl to go to show. She shoots him down and goes off with the popular stud jock. Nerd goes home and pops a Y&T cassette into his walkman (sorry kids, look those up, you know how to use the google machine). The guitars crank and something magical starts to happen.

This is where it starts to go off the rails. The kid starts to turn into the metallic figure on the In Rock We Trust album cover. 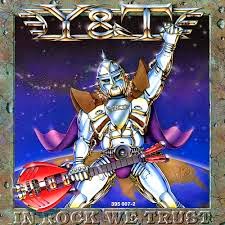 That in and of itself might not be too bad. But the result ends up looking like a cross between Iron Man and the Michelin Man.

As would be expected, the popular, hot chick and the stud run into trouble on wherever they are going. Stud boy ends up running off and leaving the hot chick at the mercy of this very unintimidating group of three....hooligans? gang members? I don't know. The MetalMichelin Man, while flying through the air, finds this scene and rescues the hot chick.

Then there's a bit of a twist, and I give someone credit for this because if you know Y&T, they never get the girl in their songs. The hot chick freaks out and leaves MetalMichelin Man confused and shedding a tear (oil drop?).

Whatever passes for special effects are disastrous throughout. But remember guys, this was before CGI, at least nothing beyond infancy. And this was the early days of MTV when bands/labels really didn't know what they were doing. But this is disastrously delicious. Judge for yourself.

I just can't leave it there. Y&T is one of my favorite bands of all time. Dave Meniketti is one of the best lead singer/lead guitar combo guys alive. And they are still doing it live. While original bassist/songwriting partner Phil Kennemore passed away in 2011 from lung cancer Dave and the band continue to melt faces. Here's a shoddy video but with good sound from a show in 2013.

I probably should have heard of Ryan Adams before now. But just within the past couple of years did I start searching out new music again. And it's been challenging and rewarding.

Adams has been putting out records for years; solo, with Whiskeytown and the Cardinals. I'll probably delve into his earlier work at some time, but right now I want to focus on his self-titled new release.

I don't want to compare Adams and this album to anyone, but if you like Tom Petty, John Hiatt, Dire Straits, John Mellencamp, the Traveling Wilburys, Robert Plant (solo stuff) or Chris Isaak you should find something to like on this record. That's some pretty heavy company.

Groovy at times, sparse at times, more often than not melancholy, this is not your party album. It's more of a stay-at-home-hang-out-on-the-porch-with-a-glass-of-wine record. But each song is so good in it's own way, once you put it on, you just want to get lost in the Ryan Adams experience.

I know there are still over three months left in 2014, but Ryan Adams Ryan Adams is the leader in the clubhouse for the best album I've heard this year.

At 11 songs and 42 minutes, you are left wanting more. But that's what a good record should do.

Here a couple of cuts. The first song of the album, "Gimme Something Good" starts it off on the right note. Plus the video features Elvira, so there's that.

And here's an acoustic version (the album version is mostly acoustic, but does have some more instrumentation) of "My Wrecking Ball".

With all the crap going on in the world, here's some happy music. Nothing to see in the video, just put in your earbuds and enjoy "Cliffs of Dover" by Eric Johnson. If this song doesn't brighten your mood, you're hopeless.

Posted by Michael Rauch at 8:36 PM No comments: