Number One Album of the Year 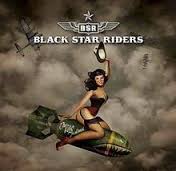 When I was listening to my list of 2015 albums, my number one surprised even me. By July I was pretty sure I had my top three. This was not one of them.

Black Star Riders grew out of the band touring as the remnants of Thin Lizzy. Out of respect for Phil Lynott and the other original members, when they decided to record new material, they chose to do it under a new name.

2015's The Killer Instinct is pure rock gold. It's what you would hope Thin Lizzy would sound like today. Classic without sounding dated.

Hope your Christmas was merry and your new year will be happy. There will be a post containing the full top ten list coming out before the new year.
Posted by Michael Rauch at 12:21 AM