Number Four Album of the Year 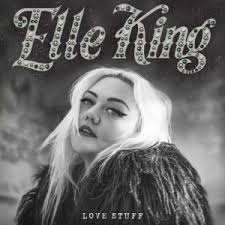 This is a late entry on my radar and it speaks to how good it is that it made the top ten, much less coming in at number four. Elle King's Love Stuff was released back in February and although I was aware of the song "Ex's and Oh's" the full album didn't invade my consciousness until last month.

Songs are what make an album great. And Love Stuff is full of good songs. If it weren't, it wouldn't be on my list. But what elevates this record is King's voice. Unique. Sultry. Smokey. Sassy. And just plain good.

With equal dexterity and equal passion, she can go from full on rocker to traditional country without missing a beat. Or a note.

Elle King's Love Stuff is another album that cannot be pigeonholed into one specific category. You want a little blues in your rock, soul in you country, swamp in your Americana, she's your artist. You want electronic, metal or rap, not so much.

A popular thing is to say an artist sounds like another artist. I do that sometimes, just for context. Elle King defies that. She sounds exactly like Elle King. And that's a good thing.
Posted by Michael Rauch at 10:25 PM