Number Five Album of the Year 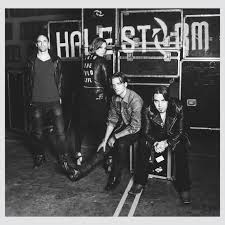 I'm not a music critic. I'm a music fan. I'm a huge Halestorm fan. For me to put Into The Wild Life at number five speaks to how good music was in 2015.

Halestorm's self-titled first full length record was pretty much straight up hard rock. 2012's The Strange Case of...  was a lot more of the same, but there were glimpses of different sides to the band.

While Into The Wild Life does not disappoint if you want your hard rock, there is more nuance and diversity to everything. It seems as though all of the influences over the years come through in this record, but not in a nostalgic way, but in a new and fresh way.

With Halestorm, heavy rock will always be their base. That's who they are, unapologetically. When listening to the album, I hear Michael Jackson, country, industrial, classic rock, rhythm and blues, heavy metal and funk. And when I listen to the record again, I'll hear something else.

Here's the joy in listening to the record, the next song is not going to sound like the last. For some people that may be a turn off. For me, that's magical. I love the unexpected, especially if it's good.
Posted by Michael Rauch at 10:24 PM

Email ThisBlogThis!Share to TwitterShare to FacebookShare to Pinterest
Labels: Halestorm, Into The Wild Life