Number Eight Album of The Year 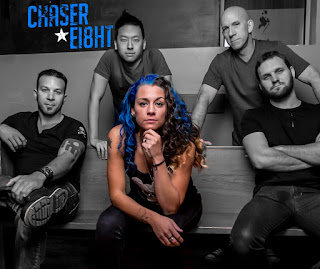 It's kind of fitting that number eight on my list is Chaser Eight. See the what happened there?

Chaser Eight's self-titled debut album Chaser Eight is musical gold. (Yes, I know, it's not their first release, just their first full length record). Released in February of this year, it took me six months to find it, but that's the landscape of independently made records, it may take a while, but if you keep looking you will find the good stuff.

Here's the thing, there is not a bad song on the record. That's hard to do. There are very few albums I can put on and listen to from start to finish without skipping songs. And if you care about music, albums still matter. Songs are great, but to get the full effect of what the artist is about, albums.

To me, the best way to really know how good or bad a record is, is to listen to it by yourself driving in your car. This one passes that test with flying colors.

Full disclosure, lead vocalist, *AUDRA* agreed to a Q&A with me, which you can read here, so I may be biased. But who isn't, right.

Seriously, I play this record at least once a week. It's that good.
Posted by Michael Rauch at 8:57 PM