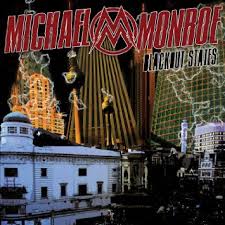 Michael Monroe has released a new video from his latest album Blackout States for the song "Goin' Down With The Ship".

For anyone unfamiliar with Monroe, he was the vocalist/frontman for the Finnish glam band Hanoi Rocks form the early 80s. They were the predecessors to and influencers of many of the 80s glam bands like Motley Crue, RATT, etc.

The career of the band Hanoi Rocks was cut short due the death of drummer Nicholas "Razzle" Dingley in 1985.

And here is last video from Hanoi Rocks' album Two Steps From the Move for the song "Boulevard of Broken Dreams".