OK, I think I like this format of posting what I've been listening to over the past month. So, we'll see how this goes.

There was a lot of good stuff to come out in April, but these three albums really stuck with me.

First up is Rod Melancon's Pinkville. It's at times manic, laid back, country, rock, punk and uncatergorizical (I may have made that word up). Melancon has a unique voice that one could either love or hate. A few times, there is more narrative telling than singing, but it works. The closest comp I can come up with is John Mellencamp deep tracks. Here is "Westgate":


I've been a Melissa Etheridge fan since her first self-titled album came out in 1988. Her latest release, The Medicine Show, may be my favorite since that debut. For this listener, this album seems to recapture the feel of her first two albums. It's not as raw as those first two, but for whatever reason, the edge is back.


The third album is the self-titled debut from Jade Bird. This was not even on my radar until my fellow blogger Megan clued me in. And I'm so glad she did. The 21-year-old singer/songwriter from the UK weaves together a perfect amalgam of country, roots rock, folk and young angst. Think of an Amanda Shires/Lucie Silvas/Alanis Morisette mashup. Yeah, it's diverse and interesting, if you're into that.

Posted by Michael Rauch at 10:12 PM No comments:

Favorite Albums At the Quarter Pole

I admit, I have not written about music for a while. Sorry folks. Life happens. I have been listening.

I'm going to reimagine this blog, maybe. Gonna try to do this monthly, but for now, this is what I've been digging for the first quarter of 2019. Bear with me. I'll try to do better.

Jenny Lewis - On The Line

Admittedly, this is outside of my wheelhouse. There is not enough swamp there, but the songs are so damned good I could not include it. It's eclectic enough to keep me interested, yet never strays outside of her zone.

Here is one of my favorite songs:


Alice Wallace - Into The Blue

Alice Wallace puts the Western in Country and Western. Specifically California Western. I love that it is unapologetically California. Artists who write albums that encompasses where they're from usually comes off as very authentic. Wallace does it well on Into The Blue. "Echo Canyon" may be the best song I've heard where the music, mood and lyrics mesh so effortlessly and beautifully.

By far Feral Roots is the best rock album I've heard this year. I read about a new (to me) term recently: NWOCR, which stands for new wave of classic rock. Rival Sons have nailed it.  Feral Roots is an amalgam of 70s classic rock, Soundgarden and some sounds from doom metal. And it has elements of swamp.

Elles Bailey's sophomore effort, Road I Call Home, has been called blues or country or roots rock among other things. What it actually is, is a badass collection of 11 songs. Yeah, there are blues elements, country elements, rock elements, but it doesn't really matter. What matters are the songs. And the songs are there in spades.

Adia wants to characterize this album as a blues album. OK. It's not what I think of when I think blues. To my ears it's more in line with the weird, trippy, uncategorical vibes of Kate Vargas. And that's a good thing. I'm a music first guy, if you're music isn't interesting, I don't care about your message/lyrics (and those are for every individual listener to interpret). Silences is interesting and good.

Vandoiers debut album The Native was an almost perfect representation of their home state of Texas. They have continued that with their sophomore effort, Forever. It's a fun album and a great listen. And it has more depth than their debut.

I've waffled on this album. There is nothing bad, but there is nothing that stands out. But there is enough there there to warrant inclusion. Full disclosure here, I saw him live before I ever heard anything from him. Great live. So that clouds my vision. I understand the restraints of recording. Make the best of what you can with the budget you have. I'll be interested in following his career to see what comes next.

This may be my favorite album early in 2019. The songs are so well-crafted. Even the songs I don't particularly like have redeeming qualities. There's a groove or a hook that can't be denied. And that voice. It has that Stevie Nicks quality that can't be quantified, it just is. This song just resonates with me, dammit it's MY bar. This is from the EP, but you get it.

Diamond Dogs - Honked! All Over Again

OK, this is kind of cheating. This is a 25 year anniversary release to digital. In other words, this is the first time the debut album from the Diamond Dogs is available to stream. It contains some B-sides and extras, I don't know which is what since I just discovered them recently. This Swedish band, heavily influenced by Honky Tonk Woman era Rolling Stones, does it well. It's a fun listen and they seem to be self-aware. From the original album:

Posted by Michael Rauch at 11:04 PM No comments: 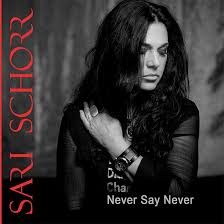 Sari Schorr's 2018 release Never Say Never is the kind of blues-infused hard rock that I love. Schorrr's raspy, powerful, badass vocals are definitely the star. But if you've been reading my blog at all, you know it's all about the music first.

Never Say Never reminds me most of an album that not many have heard: When The Blackbird Sings by Saraya. That is a compliment.

Schorr evokes the best of the 80s. Reminiscent of Bonnie Tyler, Stevie Nicks and bluesy hard rock, in the best way. It also has a 70s vibe to it.

Forget what you've heard about rock being dead. It's just being repackaged.