So, we were looking for a particular version of Dolly Parton's song Jolene. We then stumbled upon 40+ recorded versions of the song.

While that, in and of itself is not particularly noteworthy - surely there are other songs that have been recorded countless times. However, there was one facet of this we did find particularly remarkable.

There are versions of Jolene recorded in genres ranging from punk to bluegrass, from dance to jazz, from rock to Persian. There have been artists as diverse as The White Stripes and Olivia Newton-John take a stab at the song.

Some versions were really very good, others? Well, let's just say that it probably wasn't thought through very well, just to be kind.\

The interesting part of all of this is despite the different musical styles, different instrumentation, different arrangements, one thing remained very consistent - the melody. While artists had no qualms taking liberties with everything else, the melody seems to be untouchable.

Maybe some things are just too iconic to be altered.
Posted by Michael Rauch at 6:31 PM No comments:

Sunday night the Dallas Cowboys play the Washington Redskins to become champs of the NFC East.  Who would of thunk it, right?  Washington starting a rookie QB.  And the Cowboys?  Well, let's delve into that a little bit.

A month ago, Dallas was given no chance.  None.  Nada.  And here we are with a win-or-go-home game. Playoff berth on the line. How?

This middle of the defense (NT, ILB and S) has been pulling guys out of the stands just in order to fill out the roster, what with all the injuries.  The offensive line has been atrocious, injured and held together with baling wire and duct tape.  The stud RB and WR have been injured and/or in fantasy land.

Smoke and mirrors? Coaching? Resiliency?  A combination of all that?  Maybe.  Whatever it is, this team has somehow held it all together and put themselves in position to make the post season.

For all the Tony Romo detractors out there, which there are many and we admittedly are not among, you have to admit that some of those wins turn into to losses without that guy behind center.  Especially when the O-line is sieve-like at times.

Rob Ryan has somehow kept the defense viable despite all the injuries, giving the offense a chance to win those games when it mattered most.

Could Dallas have put themselves in a better position by playing better early in the season, before they turned into a MASH unit?  Sure.  But all that matters now is Sunday night.  Cowboys and Redskins.  Something is just right about that.  Be sure an tune in.

Josh Hamilton Now an Angel: Not Exactly the Apocalypse

We want to preface all that follows with this:  we wish Josh Hamilton were still a Ranger.

What stings most is not that Hamilton is gone.  We had prepared ourselves for that.  What stings is that he is now with the Los Angeles California Angels of Anaheim California.  Texas' most hated division rival.  That's what stings.

In our opinion, the Rangers never had any intention of resigning Hamilton unless it was to an organization-friendly deal.  But given the chance (which Josh never gave them, probably not his fault) the Texas brass would have matched an offer by the Angels.  Just our opinion.

While Hamilton was an integral part of the Rangers' three straight post-season appearances, he was not the whole team.  Hamilton has the ability to carry an entire team for a span when he is hot.  When he is cold, he also has the ability to suck the life out of a team.  While the good outweighs the bad, the loss is not insurmountable.

This team still has Elvis Andrus, Ian Kinsler, Adrian Beltre, and Nelson Cruz.  Throw David Murphy, Mitch Moreland into the mix.  Then the Rangers have young players like Mike Olt and Jurickson Profar, just to name two. The cupboard is far from bare.  Texas also has what most consider to be the best minor league system in the league.  So there.

The losses of Hamilton, Michael Young and Mike Napoli hurt.  But it's not the end of the world (that comes 12/21/12).  There are still free agents and trade possibilities available this winter.  It's not over yet.  Then comes the chance for some of those prospects to bloom during spring training.  Let's also not overlook the possibility of in-season trades.

While the past few days have not been ideal from a Rangers' perspective, do not panic.  This whole Major League Baseball thing is a marathon.
Posted by Michael Rauch at 4:49 PM 1 comment:

Michael Young: Thanks for Many Ranger Memories

While not officially official, Texas Rangers' Face of the Franchise will be donning a new uniform next season.

Michael Young has been traded to the Philadelphia Phillies.  We are sad to see him go, but it is the best move for both the Rangers and Michael Young.

He will play 3rd base everyday for Philly.  In Arlington, his playing time was going to decrease.  Texas is loaded in the infield with Adrian Beltre, Elvis Andrus, Mitch Morleand, and Ian Kinsler.  Not mention youngsters Jurickson Profar and Mike Olt who need at bats in 2013.

Young had a down year in 2012.  That does not diminish what he did for this organization over the past decade.  He played every position in the infield.  He put up 200+ hits many times.  He was a clubhouse leader.  He was an integral part of the building of Texas into a perennial contender.

Michael Young, you will be missed.  Best of luck.  Thanks for the memories. 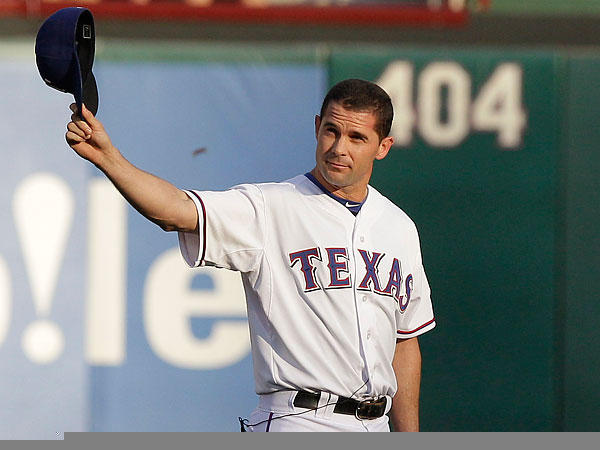 Posted by Michael Rauch at 5:24 PM No comments:

Former Texas Tech head football Tommy Tuberville has fled the Big 12 for the browner pastures of the Big East.  Tuberville is going to be the new head coach for Cincinnati.

While his abilities to coach a major college football program may be debated, he is by no means a dumb individual.  Tuberville had to see the writing on the wall.  Unless 2013 provided a miraculous turnaround for the Red Raiders, he was going to be gone anyway.  We think he took the Cincy job as a parachute.  A nice landing spot.

While we are not defending Tuberville here, it was a no-win situation from the beginning.  For any coach.  Especially if you did not repeat the success of the beloved former coach.  After Mike Leach was unceremoniously booted from the South Plains amid controversy, speculation and allegations and not to be overlooked, Craig James, no coach had a chance with the Red Raider faithful.  Maybe Nick Saban.  Or Urban Meyer.  But even that is debatable.

Heads up Kevin Sumlin.  Your offensive coordinator (and former TTU quarterback) may be getting a job offer soon.  Kliff Kingsbury's days in College Station may be numbered.

And Tuberville leaves Lubbock with this lasting impression.

We have always been fans of Rush.  Yes, Rush, the Canadian power trio.

As we were watching a documentary on the band, something that guitarist Alex Lifeson said rang true with what my wife and sister said.

We were at a Rush concert a little over a year ago.  My sister, here husband, my wife and I.  As it is at a typical Rush show, over 90% of the crowd was male.  My wife and sister were talking about how they had never really thought about a band being a guy band, but Rush was definitely a guy band.

We suppose this means Rush epitomizes the guy band.
Posted by Michael Rauch at 10:16 PM 1 comment:

Back in the day, the '80's and the times of Jesus according my daughter when she was 7 or 8, we went to our first rock concert.  The concert featured Bon Jovi as the opening act.  This was around 1985.  We have slept a time or two since then so we don't remember exactly.  They were supporting the 7800 Fahrenheit album.  Ratt was the headlining band.  We can see the career trajectories of those two bands and conclude why we were there for the opening act.  Actually we saw Ratt twice in the mid-to-late '80's.  Both times we went primarily for the opening act.  No disrespect to Ratt, but it was what it was.

Why does any of this matter?  Well, really it doesn't.  But throughout the long career of Bon Jovi, that was the only time we were able to attend a show.  That may all be about to change.

A band that can stick around for almost 30 years and still sell out stadiums and arenas, whether you are a fan of their music (and we are) or not, you've got to give them their props.  This is the stuff legends are made of.

With Bon Jovi embarking on yet another tour, we may now have the means and access to complete the circle.  Sure it's going to be a 200 mile trip.  One way.  But this is West Texas.  200 miles is a Sunday drive in these parts.

Now that the 2012 College Football regular season has come to close, we are now subjected to the worst post season in all of sport.  While the regular season brought much excitement, including the emergence of Johnny "Football/Touchdown/Heisman" Manziel, the post/bowl/silly season brings many yawns including a New Year's Day game matching up Northwestern and Mississippi State.  Mark your calendars for that one.

We could go off on a lengthy rant about the entire bowl process (which somehow excludes the second most prolific offensive team in Louisiana Tech) but we will focus here on the BCS Trophy game and the upcoming four team playoff starting in two years.

While we are no fans of the current system, it seems to get it right most years just by sheer luck.  This year, not so much.  We are not convinced that either of the teams (Notre Dame and Alabama) are the best two teams in the country.  There is circumstantial evidence to back this up.  However, there is no concrete evidence to argue otherwise.  Notre Dame is undefeated playing a schedule that did not include any cupcakes.  Alabama won the SEC, which many argue is the best conference in the nation.

We think any among Oregon, Texas A&M, Stanford, Kansas State, Florida and LSU could beat either of those teams on a neutral field at any given time.  Or not.  It's that close.

So, things would be better if we had the four team playoff in effect this season, right?

In the words of Lee Corso, "Not so fast, my friend."

But are you comfortable with a final four of Notre Dame, Alabama, Oregon and Florida? We're not.  While that would provide for three very interesting games, leaving out Stanford (who beat Oregon), Texas A&M (who beat Alabama), Kansas State and LSU just seems wrong to us.

The four team playoff is a step in the right direction.  But it is not that much better than what we have right now.  We say either go all in with an eight team playoff, or keep it as is, or maybe scrap the whole thing and go back to the old way and end everything on January 1.

Oh yeah, and you kids get off of our lawn.
Posted by Michael Rauch at 12:28 AM No comments: