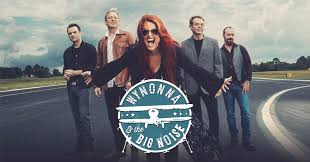 Forget everything you know about Wynonna Judd. The Judds. Her subsequent solo albums. This is Wynonna & The Big Noise.

In my opinion this is the best record Wynonna has put out, ever.

Is it country? Not really, but there are country undertones throughout.

Is it blues? Somewhat. If you expand your definition of blues.

Is it Americana? I guess. Mostly because this term lends itself to interpretation.

Is it good? Most definitely.

Kudos to Wynonna for making this record. I guess knowing that whatever she put out would not make a dent in country radio, given its current state, she put out an unabashedly Wynonna album. Wynonna & The Big Noise is raw, bluesy, country, rockin', and real.

Wynonna has always had a powerful voice. On Wynonna & The Big Noise, the full range of her vocal ability can be heard. And felt.

If you are nostalgic for the Judds, this is no the record for you. It's a new Wynonna, back and better than ever.