I'm going to preface this by saying I don't listen to any classical or orchestral music. So, I'm sure there are other cello players on the planet who could have done this, but they didn't.

During an acoustic show at Carnegie Hall, Joe Bonamassa dueled with Tina Guo, Joe on guitar, Tina on cello. The winner was anyone who gets to listen to this fantastic piece of musical genius.

I'm just a big fan of musicianship on all levels. This is at the top level. Enjoy.

Posted by Michael Rauch at 6:09 PM No comments: 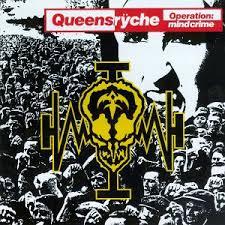 Concept albums generally don't play well in today's music world. It was even a risk in 1988 when Queensryche released Operation: Mindcrime.

If you like 80s progressive hard rock and care to follow a story, nobody did it better than Queensryche with this album.

Then there are the characters: The angst-ridden, fix-seeking late teen/early twenties Nikki. The evil mastermind behind the flawed revolution, Dr. X. The "whore from the underground" turned sympathetic sexually abused church-going counter counter culture heroine, Mary. And then the sadistic priest, Father William.

I'm not going to lay out the storyline here. If you are intrigued, listen for yourself and take it in as your own.

Operation: Mindcrime was the fourth output from Queensryche, one EP and two full length albums which never broke them through. So putting out Mindcrime at that juncture in the arc of the band was risky, kind of their 2112.

It didn't hurt that Queensryche landed the opening bill for Metallica's ...And Justice for All tour. All this led to the followup album Empire being a big hit with songs such as "Silent Lucidity" and "Jet City Woman". So the gamble paid off.

The songs on Operation: Mindcrime don't just further the story, they hold up on their own merit. Geoff Tate is a phenomenal vocalist. Chris DeGarmo and Michael Wilton's twin and/or dueling guitars are some of the best of that era, Scott Rockenfield is a monster on the drums while Eddie Jackson holds it all down with the bass.

I'm not going to embed a video because it's not about one or two songs, it's about the album. If you're reading this, you have a google machine and can listen to the entire album, which is the only way it can be appreciated.
Posted by Michael Rauch at 10:34 PM 2 comments: