From the first line of the first song, "I was born September 1st, in a little town outside Fort Worth" to the album closer "Weclome Home" the new Vandoliers album The Native is Texas through and through. 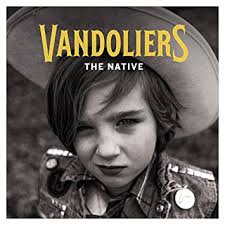 If you want to know what Texas music is all about, this album is a crash course. It takes snippets of Red Dirt, Southern Rock, Tejano, mariachi, Rockabilly, Texas swing, honky tonk, country, 80s pop rock, punk and beach/island music to create a diverse 10 song journey. Some of it may be a bit too inside baseball to resonate with everyone, such as the song "Pantego", but hell, if Cairo, IL can get a couple of songs recently, why not Pantego?

The Vandoliers are self aware and The Native never takes itself too seriously. Sure, there is some introspection and some nostalgia, but all in all, it's just fun summer fare with a perfect release date, the Friday before Memorial Day, which kind of indicates the beginning of summer in the United States.

The Native may not be for everyone, and frontman Joshua Fleming's vocals are unique, but they fit perfectly in the context of these songs.  The instrumentation and playing is spot-on throughout the album. This is just a fun album and these guys sound like they'd be great live.

Posted by Michael Rauch at 4:40 PM No comments:

Album Spotlight: Biters - The Future Ain't What It Used to Be 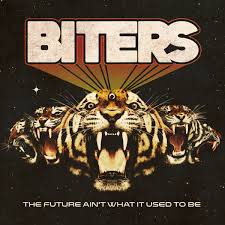 Everybody reading this has access to the Google machine. If you want history and context, look it up.

The new album from Biters is great. The Future Ain't What It Used to Be is 70s British glam, 80s Sunset Strip sleaze and Southern Rock all rolled into a fairly eclectic package.

Biters hail from Georgia, so the Southern Rock connection is easy to digest. The British glam ala The Sweet, T-Rex, Ziggy Stardust is not a natural connection. Then there's the 80s sleaze reminiscent of L.A. Guns and Faster Pussycat.

Somehow, it all works.

And here's the thing. There is no one song that makes me perk up and say "That is great!" On the other hand, there is not one bad song on the album, no filler. It all just flows.

Because of where my wheelhouse is, I'm going with my favorite 80s influenced song here: "Vulture City".

Posted by Michael Rauch at 7:58 PM No comments: 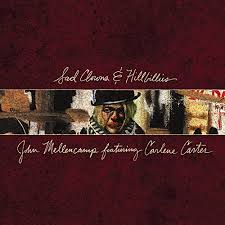 John Mellencamp's new album Sad Clowns & Hillbillies is an odd collection of songs; two covers, two songs he recorded in the 80s, two songs in which he gets songwriting credit for basically finishing a song, five duets with Carlene Carter, appearances by Martina McBride and Izzy Stradlin. All that may make it seem as though the album would be disjointed, but it turns out to be a very cohesive effort.

You may be wondering why I'm covering a John Mellencamp album at all, since I stay away from mainstream anything. Well, Mellencamp hasn't been anywhere near mainstream music in about two decades.

This started out as project between Mellencamp and Carter that was born out of their collaborations on other projects and playing together each night on Mellencamp's last tour, which Carter opened. They wanted to do an album of old time country gospel songs, but in the writing process it evolved into something quite different.

I'm not going to go song by song here, but just want to point out some stuff that stood out to me. "Grandview" was written in the early 90s by Mellencamp's cousin Bobby Clark and features Martina McBride on one verse and original Guns 'n Roses guitarist Izzy Stradlin on guitar.

"All Night Talk Radio" was originally recorded for possible inclusion on the 1995 album Mr. Happy Go Lucky. New elements were added to the version on the current album including backing vocals by Carlene Carter.

On the newly recorded tracks (which is most of the album) Mellencamp's voice shows the wear and tear of years of smoking cigarettes and drinking. That doesn't detract from the quality of the songs here. Hell, he sounds like John Hiatt has always sounded.

Start to finish, Sad Clowns & Hillbillies is one of the best albums I've heard this year.


Posted by Michael Rauch at 8:40 PM No comments: 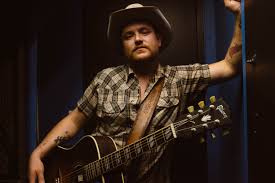 Hailing from Lubbock, Texas, Dalton Domino's latest album Corners come out of the gate and straight into the swamp with the album-opening song "The River". That's both a bold move and a statement. A bold move because most people are expecting a Texas/Red Dirt album. A statement by letting it be known that this is not your run of the mill Texas/Red Dirt album.

Not my usual style, but I'm going to take this one almost song-by-song because it's diverse enough where there is no over-arching statement to be made about the album.

"The River" is a swampy, dark song with interesting instrumentation, replete with strings (or at least synthesized strings). After that the album settles into more of the pocket that you would expect from a Texas artist for a bit with the Southern Rock influenced "Decent Man", the modern Red Dirt of "Corners" and the easy pop country leanings of "July".

"More Than You" is an interesting musical journey. It starts out with the grit and groove of a Ray Wylie Hubbard song. Then it moves to a bluesier feel and ends up almost Motown, horns and all, while not changing the beat or tempo. In its texture, it's sublime.

"Rain" is a subtle, stripped down song about loss. Great in it's simplicity.

The funky guitar tone of "Sixteen Years" drives the verses of this Southern Rock-tinged song.

"Mine Again (I'd Be a Fool)" is the closest thing that comes to a skip-worthy song on the album, but it's really just too catchy to fall into that category. It kind of has a an 80's pop rock feel to it.

With "Sister" Dalton takes us back to the swamp with an almost "Juke Box Hero" verse vibe throughout the entire song. Then he stays there with the album closer "Monster" but brings in a Pink Floyd-like prog element.

Corners is the kind of album that always interests me. Diverse, and you never really know what to expect next. I know that some people want something with a more consistent sound. If so, this album is probably not for you. But, hey, here are a couple of songs, decide for yourself.


Posted by Michael Rauch at 9:26 PM No comments:

The ESPN Cuts and Radio

I mostly write about music. And that's why you read this blog. But today I'm going to write about something only tangentially related to music.

As a sports fan, I'm well aware of the cuts that were made by ESPN last week. A lot of good people were let go. All people in sports media were touched in some way or another by the cuts. I'm not going to get into any of the reasons or perceived reasons behind the cuts. There are more than enough articles out there that can explain it better than I. What I want to talk about is the radio aspect of the cuts.

I listen to a lot of ESPN's radio programming (mostly through podcasts). When you spend an hour and 45 minutes (pod time, three hours real time) with someone everyday, they become familiar, almost like you know them.

Ryen Russillo was on vacation when the cuts happened. One of the cuts was his radio partner, Danny Kanell. Russillo addressed this on his radio show today (5/1/17). One of the things that hit me was when he said that radio is more intimate. Now, he was speaking specifically to his work relationship in which he would spend four to five hours a day, five days a week with his co-host. But this also extends to the listeners.

I had a brief Twitter exchange with Sarah Spain after one of her co-hosts on The Trifecta, Jane McManus, was a victim of the cuts, about the intimacy that radio provides. She agreed that it doesn't happen with TV or print. Radio is different. It's more personal.

Scott Van Pelt is great. I catch his late night SportsCenter from time to time. I miss him on the radio when it was the SVP and Russillo show. That show coincidentally, really got me hooked on the intimacy of radio. It became familiar and if one listened long enough, the inside jokes became inside jokes that you get.

The best radio not only lets you get a piece of the hosts' lives, but also introduces a cast of characters that make the show seem even more intimate. When the producers and board ops are given an occasional voice, or become a part of the show, it makes it feel almost familial.

I first got in tune with the ensemble dynamic listening to SVP and Russillo with Stanford Steve, Quinnipiac Steve and Outsider Mike (now best known as Mikey C). Then I found the Dan LeBatard Show with Stugotz and the shipping container. Music snob/producer Mike Ryan is doing his own show with music rejoins. Each member has their own role.

i don't have the same connection with the reporters and SportsCenter hit people. I don't wish for anyone to lose their job, but the radio people hit me more than others.
Posted by Michael Rauch at 9:59 PM No comments: