Journey was huge in the 80's. And it wasn't because of their videos. I think we all tolerated the videos just to hear the songs.

Set in a shipping yard (for no apparent reason), "Separate Ways" features really bad air guitar, air drumming and air keyboarding (is that even a thing?). There's the obligatory good looking female. Then at the end, it appears all to have been a dream.

If this video were ironic, it might make sense. But given the timeline and the advent of MTV, I think it's just bad. Judge for yourself.

Posted by Michael Rauch at 9:11 PM No comments:

Good Song, Bad Video: Scorpions: Rock You Like a Hurricane

For this edition of "Good Song, Bad Video", we take on the German metal machine known as Scorpions (and no, it's not the THE Scorpions, just Scorpions, for those scoring at home).

"Rock You Like A Hurricane" was one of their bigger hits and came out at just the right time to have a video full of cliche and cheese and nonsense.

It starts out cliche enough with cages and attractive women, only with a twist, this time the band is in the cage. And there are leopards (or some spotted jungle cats).

Then it just gets a bit weird. There are what appear to be sleep pods from which lead sing Klaus Meine is the only one who truly emerges. But there are five of them, so it's safe to assume that the other four house the rest of the band. Klaus is met by some masked woman and proceeds, uh, somewhere, where there are strange robed beings fiddling with something. They quickly exit as Klaus stumbles through.

You thought this was going somewhere? Not really. The next couple of minutes are Scorpions playing in the cage interspersed with live concert clips.

Then right after the guitar solo, we get another 80's hard rock video cliche: the dark narrow alley/cave/hallway/dungeon type scene. This one is tad more imaginative in that it has Aliens-like qualities.

The poorly constructed cage that encloses the band is falling apart at the seams by the end of the song, but the only one who breaks into the inner sanctum is one of the hot chicks who bends the bars even though any fat man could walk through at any time.

Then the band makes it back to the pods. And at least one of the hot chicks or maybe five. But there are still only five pods. It makes no sense and perfect sense all at the same time.

Posted by Michael Rauch at 8:59 PM No comments: 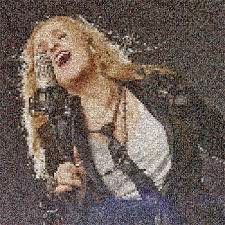 I was a huge fan of Melissa Etheridge in the late 80's/early 90's. Here first three records, Melissa Etheridge, Brave and Crazy, Never Enough, are still some of my favorites. The raw energy and attitude of those albums were great.

Then came the breakthrough Yes I Am followed by Your Little Secret which both contained the biggest hits of Etheridge's career. For me, it became a little too polished. So I kind of checked out.

Since I'm back into music heavily, searching out good stuff, when I noticed Etheridge had a new record out, I had to check out. I'm so glad I did.

Now, I don't know what she's been doing since Your Little Secret, but This Is M.E. is fantastic.

This Is M.E. starts off with a whimper. The first song, "I Won't Be Alone Tonight" is pop schlock. But then things start to pick up. "Take My Number" takes me back to the first album. Instrumentally anyway.

"A Little Hard Hearted" is also reminiscent of Etheridge's earlier stuff. In places.

Then things really start to good and swampy. The next six songs are Melissa Etheridge at her best. Raw, emotional, real and just a little bit different from what I've heard before. Those six songs are the record for me.

"Do It Again" starts out as a country-tinged ballad then Ehteridge channels here inner Janis Joplin in places, especially the pre-chorus, which is kind of unexpected. There's also what sounds like some lap steel in there.

Then she goes really deep into the swamp with "Monster". Sparse instrumentation, gospel choir-like backing vocals and some blues harp. It's all good.

With "Ain't That Bad" we're staying in the swamp. And it's still all good.

"All The Way Home" is just plain double entendre fun. In a good way. No pink umbrellas here.

The next song, "Like A Preacher", leaves the swamp, but it has classic Melissa Etheridge vocals, like the kind found on the first album.

And back to the swamp with "Stranger Road", which may just be my favorite track on the record. The vocals in the verses may be a little forced, but everything else about the song more than makes up for it.

For me, the last two tracks are forgettable.

Here's the official video for "Take My Number"

And then stuff like this is what made me a fan in the first place. Just Melissa and a 12 string Ovation.

Posted by Michael Rauch at 10:07 PM No comments: