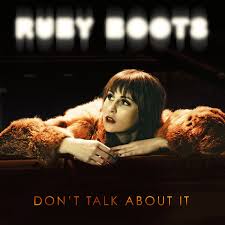 Australian rocker Ruby Boots (real name Bex Chillcot) has led an interesting life. She's been living independently since the age of 16, worked on a pearl farm and took a three year break from singing to repair vocal nodules. Those are just the highlights, but we're here to talk about her latest album Don't Talk About It. Yes, I realize the irony in that last sentence.

I'll admit it, maybe nostalgia has clouded my judgement, but save for one song, this reminds of the stuff I would hear on popular mainstream radio in the late 80s/early 90s. Can I compare Ruby Boots to anyone from that time? Not exactly, she has her own unique sound that is reminiscent of the time when radio was not filled with electronics and manufactured music.

There are elements of rockabilly, rock, country, punk and even some bubblegum on the album. It has been said that this is not a cohesive album, but that's kinda what I like about it. You want to hear the next song because you know it isn't going to be like the one you're currently listening to.

To bring it back to my nostalgia, this would have been one hell of a rock album in the 80s.  Not sure Ruby Boots or her fans would agree, but that is a compliment.

I try to be current, but music doesn't come with an expiration date. I will admit that it took me a  bit to process this album, which means I've listened to it several times. I'm still not tired of it. It's that good.

Here is the video for "Don't Talk About It"