For anyone wanting Dorothy's second album 28 Days In The Valley to be ROCKISDEAD part two, well, it's not. What it is though is a much more diverse and, in my opinion, better album. And that's saying a lot, because ROCKISDEAD was one of my top albums from 2016. 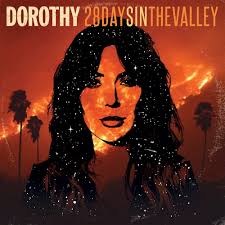 The title 28 Days In The Valley refers to how long it took to record the album, produced by, and some songs co-written by, Linda Perry. If that name sounds familiar, it should. Perry was the singer and primary songwriter for 4 Non Blondes.

Dorothy Martin, which is whom the band is named for, also got sober and removed herself from a toxic relationship and put together an entire new band for this album. As a result, some of the songs on 28 Days In The Valley seem cathartic while many others are almost spiritual in nature, reflecting her new outlook on life.

I usually don't get into background information this much or comment on lyrics (that is up for the listener's interpretation) but I thought it was important this time. It matters to how I interpret the music in this case, which, to me, is the most relevant thing; Is the music good?

After a couple of cursory spins of the album, I listened with a purpose. This is an album that is a veritable homage to classic rock. It has everything. I first fell in love with Dorothy on the debut album because of all of the swamp. 28 Days In The Valley still has that swamp, but so much more.

There is really no easy way to describe the music. From start to finish, the easiest thing to compare it to is Southern Rock. The album has so many elements of that music running through the course of the songs, but it's much more nuanced than that.

The title song is a vignette that could be on a western movie soundtrack that evokes thoughts of tumbleweeds and dust. "Mountain" is a Southern Rock, almost gospel song. "Freedom" is a Southern Rock song with hints of psychedelia. "Ain't Our Time to Die" has a strong, groovy Tom Petty vibe to it. "White Butterfly", which Dorothy said in an interview is essentially a prayer, has an Allman Brothers meets Pink Floyd to it. "Philadelphia" is reminiscent of Debbie Harry in Blondie.

This is not to say that any of the songs are cheap knock-offs or dated. It's just that those influences (if they are) come through in the songs and execution. I also get hints of Grace Slick, Heart and Sheryl Crow in different parts of the album.

I'm also I big fan of how this album was recorded/produced. It has that 70s feel where all the instruments are prominent and nothing gets buried in the mix.

28 Days In The Valley is an unapologetic rock album that should resonate with any fans of what rock was in the 70s, 80s and early 90s. And thankfully we still have artists like Dorothy making kickass rock music.

Here are some songs that represent the diversity of the album, but I would suggest listening to it all:

Posted by Michael Rauch at 7:06 PM