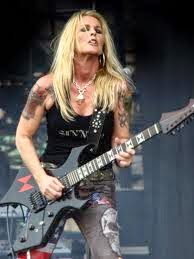 Lita Ford was a member of the iconic all-girl band The Runaways along with Joan Jett and Cherie Currie.. She enjoyed a fair amount of success in the Hair Band era with moderate hits "Kiss Me Deadly" and "Shot of Poison" and here career was bolstered by "Close Your Eyes Forever", a duet with Ozzy Osbourne.

I've always felt Lita was underrated as a vocalist and not given anywhere near the credit she deserves as a guitarist. Always over shadowed by Joan Jett, Lita managed to carve out a very nice career.

Lita definitely knew how to play up the glam fantasy as the following video will attest. That may have led somewhat to her being overlooked as a serious guitarist/musician.


But you can't deny the heartfelt passion is this next song, released in 2013. There's a backstory there, but I won't go into it. If you're here, you know how to run the google machine.