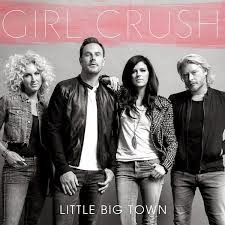 If you haven't heard, apparently some country radio stations are relegating Little Big Town's most recent single "Girl Crush" to low rotation. The reason? Listeners have been calling in complaining about the stations pushing a lesbian agenda. There is only anecdotal evidence of this as far as I can tell.

There are scads of these reports all over the internet. I'm not going to link, just Google it. You're reading this, you have access.

If you listen to the song, it's about jealousy and has nothing whatsoever to do with lesbianism. But according to some reports, those complaining don't care to even entertain that conversation.

Then came the reports that this controversy was all over blown. That there really weren't many complaints being logged.

Halesorm's Lzzy Hale got in on the action a few days ago with these tweets:

Halestorm opened on several dates of Eric Church's tour and Lzzy made appearances with Church on a couple of awards showing playing and singing with him on "That's Damn Rock and Roll". Also residing and recording in Nashville, Halestorm are no strangers to country music.

Here is the Little Big Town lyric video of "Girl Crush". Not much can be misinterpreted unless you really try.

And this was just posted to YouTube today or last night if you're in Europe (3/28/15) from Halestorm's show in Germany. Halestorm covered "Girl Crush" for the first time. Lzzy didn't offer any explanation to the German audience other it was a song they liked. It was recorded on someone's mobile device, I suppose, so the audio is not stellar, but I've heard much worse.

And now Halestorm played an acoustic rendition of the song on SiriusXM recorded here:

Posted by Michael Rauch at 7:31 PM