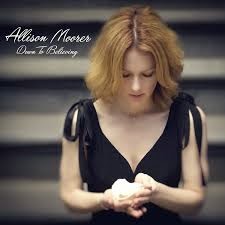 Allison Moorer released her 8th studio record Down To Believing. I can't compare it to any of her previous albums because I have just recently discovered her. That's on me. But what I can compare it to is the rest of the music out there right now and it stacks up among the best.

This record comes after her divorce from Steve Earle. There's a lot of emotion on the album that undoubtedly comes from that.

I don't know how classify music anymore. Country music is all EDM, rap and Southern Rock infused. Rock music is dead on radio except for classic rock. Pop music is just basically unlistenable. Down To Believing falls somewhere in the vast wasteland of good music that nobody ever hears. Does it even exist?

This ranks in the top two or three records released this year for me. And that speaks well of what has come out so far because top to bottom this is an excellent record.

It's not fair to try to put a label on this record. If you like Ryan Adams, Rosanne Cash, Holly Williams, Justin Townes Earle, the Eagles or Linda Ronstadt there will be something for you on this record.

Here is the video for "Like It Used To Be". Enjoy.

Posted by Michael Rauch at 2:12 PM