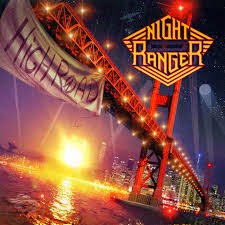 Night Ranger released their 11th studio album last month, High Road. It may just be their best effort yet. Over 30 years after their debut release Dawn Patrol, Night Ranger is still bringing it. While years of hard living and age have taken something away from Jack Blades and Kelly Keagy in the vocal department, the musicianship has only improved.

This is probably the most diverse record Night Ranger has put out. From classic 80's-style rockers to KISS meets Loverboy to a Styx/Kansas/Deep Purple 70's style mashup, it's all good.

Here's the shame of it all: Nobody outside of hardcore Night Ranger fans and good music archaeologists is going to hear it if left up to traditional outlets.  If you're reading this, you don't rely on traditional outlets, so I'm going track-by-track here.

The record starts off with the title track "High Road". Fun summertime song. Big chorus. "You don't need us, you need a mind of your own." Favorite line from the song. Roll down the windows and blast this one.

"Rollin' On" brings on the heavier side of Night Ranger. This is the KISS meets Loverboy song. If you don't see the connection, listen to more music.

"Don't Live Here Anymore" is a 70's style ballad the evokes the sounds of Styx and Kansas with a touch of Deep Purple and Lynyrd Skynyrd. This may be my favorite song on the album, but I may change my mind tomorrow. There are so many layers to the song. Lyrically it's mature and introspective. Musically it goes so many places, and all are good.

"I'm Coming Home" is a classic country lyric set to Thin Lizzy style rock music. Or maybe it's just reminiscent of Thin Lizzy. It's catchy and it rocks.

"X Generation" falls a bit flat, especially lyrically, but the guitar work almost makes up for that.

"Only For You Only" is the kind of ballad Night Ranger made famous. It's not bad. It's not great. There's no place in current rock radio for it to find a home, but it would be better than 90% of what's being played on current country radio. And no, it's not a country song. But neither is mainstream country radio.

"Hang On" is a very Classic Rock sounding song that would be very much at home on an early Foreigner record. But it doesn't sound dated.

"St. Bartholomew" starts out with the chug of early Judas Priest, but seamlessly transforms by the chorus into a melodic rock track.

"Brothers" is very Beatles-esque. I don't know how else to describe it. Probably my least favorite track. But it's not horrible.

"L.A. No Name" ends the record and is very un-Night Ranger like. It's an acoustic guitar instrumental. And it's fantastic.