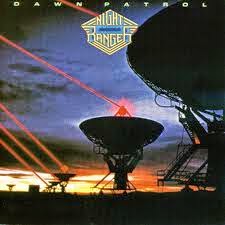 Inarguably, Night Ranger's greatest success came with the release of 1983's Midnight Madness with the anthemic "(You Can Still) Rock in America" and the prototypical power ballad "Sister Christian". However, their 1982 debut Dawn Patrol, still stands as one of their best, and my personal favorite.

I've found that debut albums are often some of my favorites. Why? The artist/band has had their whole lives to construct 10 good songs. After that, they have a year or two to put a record together. Granted, a lot of bands go on to make better records, but there is still something special about that first one, both as a consumer and an artist.

Dawn Patrol is one of those special records.

It starts out with the minor hit "Don't Tell Me You Love Me", which gives you a good idea of what Night Ranger is all about: Hair Metal before it was a thing.

The next track, "Sing Me Away" is kind of forgettable. Then we have "At Night She Sleeps" in which we get a taste of the lyrical genius of Night Ranger (tongue planted firmly in cheek here). But they really did have some interesting lyrics: "She's seals her fate in a car on a date with some loser from Birmingham". (Sorry Alabama or England, however you wish to interpret).

"Call My Name" is one of my favorite songs of all time. And the 2nd verse has some of my favorite lyrics of all time:
"Your silhouette always appears in my window
I close my eyes and hear
The applause of at least a thousand different strangers
Every one seems sincere
Or did you notice?
Was it you that I hear?"

Okay, so it's not high brow poetry. But I like it. And that's all that matters.

This album came out in the cassette era (saddens me that kids today will never know the side one/side two element) and ends with "Eddies Comin' Out Tonight". The chorus is a bit trite, but the verses are quite interesting.

Side two (yeah, I'm still in cassette mode) opens with three standard rockers, "Can't Find Me A Thrill", "Young Girl in Love" and "Play Rough". While they are not throwaways or filler, they are not among my favorites. Others may disagree. And that's fine.

The next song, "Penny", is not that distinguishable from the previous songs, other than I like it better.  That's just personal preference.

The record ends with the eponymously named "Night Ranger'.  It's not bad, it's not great.

No, this is not an iconic record. It's just good. And underrated in the Night Ranger lexicon.

You can still Rock in America. At least today.