Def Leppard's Pyromania still stands as one of the best hard rock albums ever made. I don't know if there was really a bad song on the entire record. And Def Leppard came along at just the right time to take advantage of MTV becoming, for all intents and purposes, the world's biggest radio station. 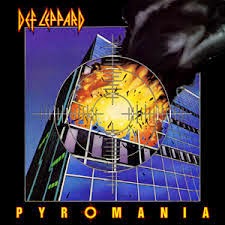 Back in the days when Rick Allen was not the one-armed wonder and Phil Collen still owned shirts, Def Leppard graced us with one of the cheesiest videos ever with "Foolin'".

While this is mostly a performance video set on a cheap soundstage, this video gets high cheese marks for the inane, disjointed imagery interspersed throughout.

When we move on to the pre-chorus, Joe Elliott is strapped to what appears to be some triangular shaped torture device. It's a recurring theme in the video. But the torture aspect is lost on me. Unless, of course, we count the torture of having to endure this.

The second verse introduces us to some sorceress witch-like character who apparently through her crystal ball is the one behind Elliot on the triangular torture device. Or maybe she is the one who sets Joe free. We never see her again.

Oh, then we have the band rising out of some pit with angel of death and skull imagery. That is just SO Def Leppard.

It's a great song from a great band and I probably spent way more time deconstructing this video than what was put into crafting it. Judge for yourself.


All in all, good fun. Back in the day it made for good video viewing. Now it makes for good fodder.
Posted by Michael Rauch at 9:24 PM