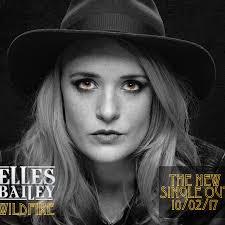 I don't have expectations that cannot be met. That seems to be a healthier way to live life. I'm not saying to lower the bar, but don't make your expectations beyond the realm of probability. Maybe I was a little too excited for the new Elles Bailey album. Her 2016 EP The Elberton Sessions had my hopes up.
After hearing that, I couldn't help myself.

Then she drops her first full-length album, Wildfire.

Well, my expectations, as high as they were, turned our to be low. Wildfire is a great bluesy rock album with some country elements. It's bluesy and swampy. Bailey's voice is smokey and torchy and powerful. The instrumentation and production are impeccable. It's true to course and also diverse.

Here's the thing. It's pretty much a modern 70s rock album coming from a current British female artist. Not so much in lyrical content, but sound.  There's a cover of Taylor Swift's "Shake It Off" that I didn't recognize until the second spin because it is so different.

Though rooted heavily in the blues, Wildfire is so much more than just blues. There is something to be appreciated for fans of any genre that values real instrumentation and vocals over electronics and autotuned vocals.