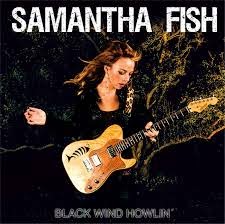 I'll be honest, I'd never heard of Samantha Fish before yesterday. I was doing some searching on youtube for a version of the Rolling Stones' "Dead Flowers" and came across hers. I liked it, so naturally, I had to investigate further.

Hailing from Kansas City, Samantha is more blues than rock, but more rock than just blues. She also dabbles in country-tinged songs as well. At least that is what I gathered from a couple of listens to her 2013 album Black Wind Howlin', released last September.

There is a lot of stuff to like on this album, whether you are a fan of blues, rock, country or Americana. She delivers it all. Known as a blues artist, she is. But not purely. There is enough blues on the record to satisfy all but the purists, including a cover of Howlin' Wolf's "Who's Been Talking." That is the only cover on the album, although there is a song called "Heartbreaker" which I almost expected to be a Led Zeppelin cover, which could have been very interesting.

The songs are minimal in instrumentation, mostly just guitar, bass and drums with not a lot of overdubs. A classic three piece setup. There is some harp and fiddle on a couple of songs.

At times, Samantha's vocals remind me a bit of Bonnie Raitt, which is a good thing, but she also has her own style. Her guitar work is good, but she's no Stevie Ray (but then again, who is?).

For the rockers, there are tracks like "Miles to Go", "Heartbreaker" and "Lay it Down". For a bit of Louisiana country with hints of zydeco, check out "Last September". And then there is plenty of blues throughout.

This is the video for "Lay it Down".

I just can't believe I've never heard of her before. Enjoy.

TheCheapSeats on twitter.
Posted by Michael Rauch at 5:52 PM