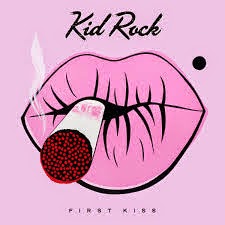 Is the new Kid Rock record First Kiss great? Groundbreaking? Nope and nope. But you know what it is? Full of catchy tunes and a lot of fun.

This comes out at the perfect time as we get out of the February doldrums and look forward to (hopefully) warmer weather. It's an easy listen. Sittin' on the deck or the porch drinking an adult beverage music. Cruising down the road with the windows open and/or top down music. Sing-along-chorus music. Don't want to/have to think kind of music.

There is no "Bawitaba" or "Cowboy" on this record. None of the rap/rock that Kid Rock did earlier in his career.

If you like the first single "First Kiss" below, there's more of the same throughout the album.