Q & A With Brandy Zdan 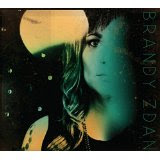 Brandy Zdan's self-titled debut album was one of my favorite records of 2015. The current Nashville residing, Canadian born Zdan recently took the time to answer a few questions.

We discussed her disdain for cymbals, love of toques, thrifting and some music stuff.

First of all, thank you for taking the time to do this.
My pleasure.

On your album, Brandy Zdan, I read that there are only 31 cymbal crashes on the entire record. Is that true? And if it is, was that a conscious decision, or just something that happened organically?
That is true. My friends, The Somebody’s Darling band sent me a text one night telling me they counted the cymbal when they played the album in the van. In fact, you don’t hear a cymbal until song 5 and most of the cymbals are in only two songs, "Only the Sad Songs" and "Courtship of Wild Horses".
And yes, this is a conscious decision. I will openly admit that I dislike cymbals, like REALLY dislike them. Most drummers don’t know how to use them properly. In fact, I will tell my drummers to fight the instinct to keep time on a high hat, or elsewhere.
I LOVE the simplicity of a great sounding snare and kick, as you hear on the first half of the album.


I’m a washed-up, hack bass player. But when I was playing, my influences weren’t necessarily other bass players. I got a lot of inspiration from killer rhythm guitarists. Who or what inspires you that might surprise some people?
I’m on a constant search for things that get me excited musically. I am obsessed with the steel guitar and guitar in general, … I listen to a lot of instrumental stuff like Daniel Lanois’ solo material & Bill Frisell, and I just recently discovered a band called A Winged Victory for the Sullen, which is cinematic lush strings and piano and guitar. It makes my heart feel crazy things.

How many toque’s do you own and how often do get to utilize them living in Nashville?
I own too many. I just got a fake wolf fur toque that is now my favorite. I don’t use them very often, but I like to save on heat bills so you would catch me at home wearing one for sure in the winter.

Rush - Properly Rated, but way to busy musically for me.

Celine Dion - Properly Rated but you wouldn’t find me putting on a record of hers.

Loverboy - What are their hits? Pass. haha.

Justin Bieber - Pass. I’ve never even heard a song of his.

Bryan Adams - Properly Rated. I love the F out of him. I remember making a lip sync video in all demin when I was 10 singing “Everything I do, I do it for you”. I loved that song. That song was from the Robin Hood flick with Kevin Costner and funny enough I got to sing backups on Kevin’s most recent record. Full circle.

Outside of music, what is Brandy Zdan passionate about?
I LOVE thrifting. SO much. You’ll catch me doing that in just about every town I travel to.
I also do a lot of leatherwork, I make things out of deerskin. I enjoy working with my hands in that way. I also love the outdoors. I don’t get out camping near enough since I’ve been gone from Canada but I always feel the pull to get out of the city.

From Canada to Austin to Nashville. Not the normal route, but how did it work for you?
I had been touring the USA with my old band Twilight Hotel and we were noticing the reception was a lot better than in our home country. We had a list of cities that we were thinking of moving to and Austin won out. We moved onto a commune in south Austin when we first moved there. It was all the hippie Austin things you would expect it to be. I have fond memories of that time.
After that band broke up and I spent two years with The Trishas, and as that was ending I was moving full speed ahead with the solo project. I knew I wasn’t gonna do it in Austin. Nashville just made sense. I’ve been spending time there since 2007 when I made the second Twilight Hotel record there. It was the right move for sure. I won’t be there forever, but for now, I love the community I’m becoming a part of and how the town makes me feel like less of an alien.

I’ve been finding some really cool music coming out of Nashville right now. Who are some artists that you really like in your adopted home?
I love Lilly Hiatt and Angel Snow. They are doing some of the coolest female singer/songwriter stuff. I also love William Tyler, Joe Pisapia and Colin Linden.

I’ve described the music on your album as Grace Potter meets early Sheryl Crow with goth undertones. And in my mind, those are all positive comparisons. Is that fair, accurate and/or way off base?
I hear those a lot. It’s fair I think. I don’t take too much stock in comparisions. I just let people say what they want try to let it not affect me…
I like to live in the creative space where I’m not defining myself. It’s the only way I can really be myself.

What is your gear set up? Guitar, amp, effects, etc? And how much does it differ from studio to stage?
I love this question.
I play a custom Gamble Guitar Works telecaster.
I was never a tele girl until a couple years ago.
I have flat wound 12’s on it which gives it a wide thick tone and play that through a 79 Princeton Reverb. This is my favorite combo right now.
My pedal board is simple but super important.
I love my Strymon El Capistan Tape Echo as well as the Eventide Space Rever pedal.
I also, have a Malekko Tremelo and Black Stone Overdrive pedal.
Sometimes I run my vocals through a Memory Man deluxe.
This is the same rig I use in the studio except I use a bunch of different guitars. It all depends on what the song calls for.
I’m always on the search for new exciting ways to fuck with my tone.
I probably derive the most joy out of new little tone discoveries.

Do you write alone, or do you collaborate on some stuff? And which do you prefer?
The last album I wrote completely by myself. I like co-writing but I tend to get songs for others and not for myself. They are both fine. It’s always changing.

Stranded on a deserted island, what three albums do you want with you?
The Beatles- White Album
Blake Mills- Break Mirrors
Daniel Lanois- Belladonna
My answer as of Jan. 28. It changes daily.

The music industry is at a crossroads right now. It has to figure out how to deal with streaming services, the decline of physical sales and the fact that mainstream radio only plays crap (ok, that’s just my opinion). It is easier to get music out to the dumb masses right now, but harder to get noticed. How do you navigate in this world?
The only way to succeed, in my eyes, at least in my genre world, is to find your unique voice, nurture that, and put the best version of yourself forward. If you cater to anyone or sacrifice the artistry, people can see through that. You just need to get good enough so people won’t ignore you. I’m not worried about the industry, musicians have always been but the music industry is just a blip in time. It’ll all get figured out.
I see the connection one makes to music listeners at shows, I see the organic build. THAT will never go away.

The floor is yours. What do you want everyone to know about Brandy Zdan going forward?
It's only the beginning.