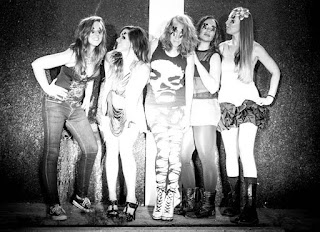 
Speaking of gear, what do you use? Basses, amps and effects, if any. Is your set up any different from stage to studio? If so, how?
We all try to keep studio the same as stage so that the studio sound is replicable on-stage. I just have a couple of Fender Jazz basses, which I see as The Standard. Am currently on an Orange Terror Bass 1000w amp and a 4x10 Orange cabinet. Typically I like to keep all the settings at "noon" - it sounds great just like that. The Terror is so powerful I usually can't get it over 3 volume before people complain, but I turned it up to 5 recently and I think it altered my heartbeat! Pedals I personally like to keep to a minimum, so am just carrying a tuner and Electro-Harmonix Bassballs (for that weird sound in Sour Blooms and Weedo). May add a simple distortion but trying to keep it as clean and simple as I can for now. Also have a Big Muff but haven't used it with The Dead Deads...yet.

Earlier you said that Meta encouraged you to pick up the bass. How long ago was that? And was that the genesis of the Dead Deads, or did that come later?
That was the genesis of PRIM, which was only about 5 years ago.

So, PRIM was your first band in which you played bass? Before that, were you in any other bands on other instruments? What history did you have in performing in a public setting?
Not much serious "public performance" experience until PRIM and more so with The Dead Deads. Like any band geek, throughout school I played a lot between marching/concert bands, youth symphony, piano recitals, etc. I've jumped up on stage with some friends in a punk band to sing a one-off Blondie cover, on trumpet hit the syncopations in a ska band, played the "Miserlou" solo with some surf rockers, and filled in the brass section in Meta's "hip-hopera"...but playing bass with this band is definitely the most intense!

Aside from obviously being influenced by bass players, when I was developing my style I also drew a lot from other musicians, especially great rhythm guitar players. From five years ago until now, specifically related to playing bass, who and/or what has been most influential in your development, style, playing, etc.?
Such a tough question, I haven't really thought about it. I initially got some basic lessons and tips and tricks from different bass-playing friends. I guess I'd have to list Dave Blood, Dee Dee Ramone, and Frank Bello as influences in terms of learning their songs and growing from that. I definitely have a more simple style and seek to lock in with the drums to support and enhance the band's sound.

The chemistry between the drummer and the bass player is essential. It's called a rhythm section for a reason. Your drummer in the Dead Deads brings it and brings it hard. How long did take for you and Billy to lock in?
Agreed! Day one she and I were on the same page, it felt magical :) I've told her this, and I know this is cheesy, but....when she's really playing hard and fast and intricately, for instance like on a song like Rainbeau, playing with her feels like I'm kind of soaring. She's so great, I just hang on with her and go on up to the moon!

So, day one you were on the same page. What was day one? I guess what I'm really asking is: how did the Dead Deads become a band?
I didn't mark the day at the time, but I'm thinking roughly June of 2013 we started jamming. Then we worked up a Dead Milkmen set for Halloween as our first / possibly only gig, but we enjoyed playing together so much and had started writing originals that we liked, so we kept it up and here we are!

Within the band, how does the songwriting process work? Does everyone come in with ideas that get hashed out collectively? Do people come in with complete songs that get tweaked?
We do it all in the practice space at once. We never come in with anything close to complete....we may come with some licks of our own to get us started, but we talk about what kind of song we want to play, what mood we're in, anything that may have inspired any of us, and then start jamming. Lyrically, we all may throw out thematic ideas, but Meta does most of the lyrics. She first starts with scratch vocals based on sounds and vowels as we're writing the song. Sometimes that becomes the final lyric, other times she goes back and writes all new lyrics from the music we've written. It's a quick, fun, collaborative process that we all enjoy.

The Dead Deads debut album came out over a year ago. How have the songs evolved after playing them live and as the band has gotten tighter? Is there anything you wish you could re-record?
We started modifying songs like Sour Blooms and Pyre Rats early on to be shorter so that we could fit more songs in our sets, and we've added a funky little rhythm thing to Radio to make it even MORE 90's-sounding. We did re-record Lemonade to go along with the video this past July, to be a little edgier. There are some things about Rainbeau that could be better and that we play better or tighter now, but we love how it came out.

For many, many years, Nashville was the place to go if you wanted to make it in country music. For rock or pop it was Los Angeles or New York. Now it is much more diverse with artists of many different genres being based in Nashville. How has being based in Music City helped/been a hindrance to the Dead Deads and to you personally?
Definitely helped! Simply finding 5 like-minded musicians to get together and jam in the basement...Nashville and in our case specifically East Nashville is teeming with creative people. It's a cliche, but part of living in Nashville is that every house has a guitar, and the love of music is pervasive. Many of our friends are also musicians or otherwise in the music business, so we have a bit of insight into how things work (and don't work!). I grew up here, and there has always been a good punk and rock scene for a medium-sized city - it helps having 3 major universities around with strong music and music business programs attracting so many students who are both musicians and audience-members. So while Jack White and Kings of Leon definitely brought a national spotlight to Nashville rock in the last decade, the scene was already here.

Not to bring up a sore subject, but I know that you are football/Tennessee Titans fan. The Titans finally landed in Nashville in 1998. Were you a fan from the beginning?
I was definitely a fan from the beginning! It was so exciting to get our own team back then...prior to that, we'd root for either Atlanta or New Orleans. I had never been to a pro football game before we got our own team, so it was a big thrill. Plus our first season was so incredible - from the Music City Miracle to the Superbowl - WOW. Will we ever be that good again?

When can we expect new music and/or a new album from The Dead Deads?
ASAP! We have recorded one new song and just filmed a video, currently being edited. We have 7 or 8 new songs already and have started laying the foundations for recording those as well. Looking like an EP first with some fun videos and then an LP following, similar to how we did the last record. I'm very excited to get that out there! We get great response on the new stuff live and am confident that will translate well in the recordings.

Let's wrap this up. Anything, music or otherwise, that you would like to make people aware? The floor is yours.
I would encourage anyone who has an instrument at home gathering dust to blow it off and start playing again. It's never too late, you'll be surprised what your body and mind still remember. It just plain feels good.
And keep your eyes on The Dead Deads - we have some new music coming out and hope to be coming through a town near you soon!
And thank you, Mr Cheap Seats, for the opportunity!

Edit: We were initially going to post this in conjunction with the release of The Dead Deads new video. Stuff happens, but now the video is here for the new single "Super Tiny". Enjoy.

Posted by Michael Rauch at 7:49 PM