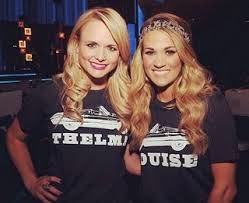 If you read this blog at all, you know I don't really deal in negativity. Especially when it comes to my music posts. I like to feature good stuff that I've found. But what happened at the Billboard Music Awards Sunday night bears comment.

I'm talking about the Carrie Underwood/Miranda Lambert 70's Aerosmith/bad anthem mashup. It was, quite frankly, poor execution of a less-than-mediocre song. "Something Bad", it was. Don't believe me? Here's some video proof. Judge for yourself.

Don't get me wrong. I like both Carrie and Miranda. I'm just disappointed that this is what they came up with in collaboration. It's beneath both of them.

But that brings me to a bigger subject. This is a rock song. At least what I grew up knowing as rock. Not that there is anything inherently wrong with that. In fact 70's, 80's and 90's style rock and pop has been co-opted by country music. For me that's a good thing. I like that kind of music.

But on the flip side, there seems to be no room for what is considered traditional country. And that's a shame. I was watching the top 20 on GAC or CMT (can't remember which) this past weekend, and there was not one song that even resembled traditional country. Most of the songs would be in heavy rotation on MTV or VH1 a few years ago.

Right now, there's no room for rock in pop, and no room for traditional country in country. I don't know where it goes from here, but some think that there may be a split in country music, which makes sense to me.

Eric Church is taking hard rock Grammy winners Halestorm out on tour with him for a few dates. That pairing makes more sense to me the than Dwight Yoakam, who will be on the whole tour. Since we're talking about Halestorm and Carrie Underwood, a couple of songs they recorded are practically interchangeable.
Posted by Michael Rauch at 10:17 PM