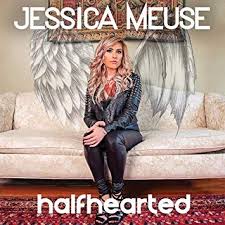 I've been sitting on this for a while. Why? Because, for the most part, it's a lot of the same song, thematically, over and over. And it's 15 songs long.

The theme? I'm better off without you since you treated me like garbage. The length? Nine to 11 is the sweet spot for me as far as album length, but since this was four years in the making...

I could easily dismiss Jessica Meuse's debut album Halfhearted on either of the aforementioned premises. But here's the thing: The songs are so damned good musically.

Halfhearted definitely leans Country. But not in the way one would expect. There are songs that would comfortably fit into the modern definition of Country Radio (though she has no chance, because she's a "she"). Then there are the songs that would nestle nicely into late 70s/early 80s country. That and the Southern Rock influence.

Jessica's voice is not soaring vocal gymnastics ala Carrie Underwood, but it suits the songs. Much like Stevie Nicks.

Probably not the best way to introduce an album that I really, really like. But despite what I said above, Jessica Meuse has put together a great album.

Halfhearted is diverse (and regular readers know how I love diversity), And here is the thing, I'm an album guy, and this album, you can put it on and listen to it start to finish and be satisfied. Does that sound like a ringing endorsement? Nope. But it is.

I like the album. Here are some songs. Judge for yourself.