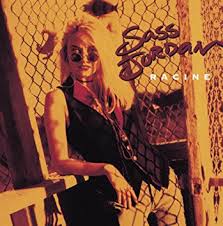 One of the great things about fantastic music is that it doesn't have an expiration date. Music made that plays to the trends is usually disposable after a few years, but if an artist makes a great album, it will stand the test of time. That's what Sass Jordan did 25 years ago with Racine.

On the 25th anniversary (not to the day, but the year) of Racine's debut, Sass Jordan is releasing Racine ReVisited on September 15, which is a total re-recording of the album with hand picked musicians. You can read more about that on Jordan's website, and you should.

Being totally transparent, I readily admit I was not aware of the original album until I ran across something about Jordan doing a 25th anniversary remake. Sure, I was aware of Sass Jordan, have heard a few songs, but never really spent any time with her music. Like I said in the opening, there is no expiration date on good music. So listening to Racine was like listening to a brand new album. And what an album it is, very worthy of a remake, if only the remake can hold up to the original.

Racine is a rock album, borrowing heavily from the blues with a sprinkling of country and honky tonk thrown in. For those that read regularly, yes, there is swamp. Jordan's vocals are in the vein of Melissa Etheridge, Bonnie Raitt, Janis Joplin. And for a British born Canadian, there seems to be some inexplicable twang at times.

I don't know Jordan's influences, but there is a heavy Rolling Stones vibe to a lot of the songs.

Racine ReVisted will be her first album since 2009's From Dusk til Dawn. And I understand why established artists don't spend the money to record new music with the way the industry is nowadays so this will be an interesting study because Racine ReVistied is not just a remastering or remix, it's a full fledged re-recording of the album.

I'm also very compelled by Racine ReVisited because it wasn't re-recorded to be current, it was re-recorded 70s style, according to Jordan.

In the meantime, get to know the 25 year old original. Here are a couple of my favorite tracks.

Posted by Michael Rauch at 7:11 PM