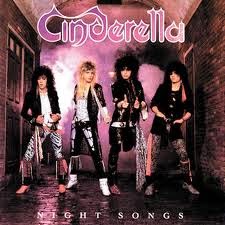 Cinderella (the 80's hard rock band, not the Disney character/movie) had the unfortunate luck to come along just at the right time to become hugely successful.

That statement will confuse most people, but hear me out. Cinderella's debut album Night Songs came out in 1986  at the height of the hair metal explosion. And they played it up, initially. Just look at the album cover to the right.

They had the look, the hair (including bassist Eric Brittingham's perfect blonde waterfall 'do), the synchronized guitar spins, and the attitude. MTV ready and willing. But they also had the chops, especially lead vocalist/lead guitarist/bandleader Tom Keifer. And the songs. Cinderella was much more akin to AC/DC than Poison.

Cinderella was lumped in with the hair bands. And that was fair. Check out this video. They played the part.

What wasn't fair is that Cinderella and a handful of other quality bands from that era were swept under the rug with everything associated with Hair Metal. I've heard the story where Keifer was shopping new songs to labels and upon hearing the songs, the execs were intrigued. When they found out who it was, they dismissed it.

Had Night Songs come out 10 years earlier, or maybe even five, then the career narrative would have been different. Cinderella is much bluesier and much more diverse than the pigeon hole in which they've been relegated. Fortunately for us, Tom Keifer is still creating music and Cinderella is still performing.

"Shelter Me" is much more representative of what Cinderella was all about. Excuse the bad video and Little Richard cameo.

Posted by Michael Rauch at 8:48 PM