Q and A with Plastic Rhino 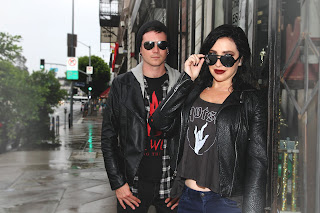 The Los Angeles-based duo Plastic Rhino recently released their third album Recondition. You can read on their website what they think. Here's my take: very good hard rock album. Sure, you can try to break it down and do all the sub-genre stuff, but what it all boils down to is that it's hard rock done well.

For all the doomsayers saying "rock is dead", artists like Plastic Rhino are proving that it is not. You can read my Album Spotlight here.

Vocalist Atara Gottschalk and guitarist Jack Glazer were kind enough to to grant me a Q and A. The results follow.


First of all, thank you for doing this.
Atara Gottschalk: Thanks for taking the time to get to know us.

Plastic Rhino. Interesting name for a band. Where did that come from?
Atara: Rhinos are such majestic animals. Also two random words that sounded good together for a band name.

I’ve read the bio. I’ve listened to the music. Your influences seem to be spread out over several decades. I can hear it. But it also seems to be wider than what is mentioned. I hear blues influences and pop influences along with the metal/hard rock influences mentioned. In other words, I hear a lot there and that interests me. So use as many words as you want, here’s your chance: Who are your musical influences?
Jack Glazer: I’m heavily influenced by all of the typical rock/metal guitarists that have influenced most guitar players such as Eddie Van Halen, Jimi Hendrix, Randy Rhodes, Jimmy Page, Dimebag Darrell, James Hetfield and Kirk Hammett.
Atara: I grew up on MTV. Music videos were my babysitter. I love all types of music. Then of course growing up in the 90’s grunge/alternative era I was all about it. That music really stuck with me. Still does to this day. The CD stack on the CD Player was full of all different types of music as everyone in my family had something different they liked. Spice Girls, Radiohead, Alice In Chains, Pink Floyd, 10CC, Crowded House, the Rent Soundtrack, the list goes on and on. We listened to everything and anything. There was always music in the house, always a concert to go see. As far as this album goes, I wanted to channel Chris Cornell. He is like a soulful woman with man power behind it. I just want to be Chris Cornell, but the female version. The album’s influences are Audioslave, Queen’s Of The Stone Age, Garbage, Alice In Chains.

Plastic Rhino is marketed as a duo. It takes more than two people to pull off a show. It can be done in the studio. Do you have a regular touring band and/or studio musicians you work with?
Atara: When we record it is just us and our producer Tom Chandler. We brought in our live band drummer Jordan Ring for the drum recordings on this album. For live shows we have 4 wonderful musicians join us to bring the music to life. Jake Long, Rob Lovejoy, Jordan Ring, Kati Caliber.

Take me and my readers through the songwriting process for Plastic Rhino. Do you both write? Independently or collaboratively? How does a song come to fruition?
Jack: We are both always coming up with ideas, be it entire songs or even little melody lines. My phone’s voice memo app is stuffed with ideas. Typically, we will start going through those parts and start to hear which ones seem to fit with one another. If you have just a couple of cool parts, a song can pretty much finish itself. The songs are always a collaborated idea.

I grew up before the digital world. We listened to the radio or bought physical copies of music. That has all changed. It is easier to get music out there, but much harder to get it noticed. And there is a lot out there. How do you go about getting your music noticed?
Jack: The internet is a double edged sword. On one hand, it makes it super simple to put yourself out there and be heard with little to no cost. On the other hand, EVERYONE has that ability, so the market is oversaturated. In this day in age, you pretty much have to present something new to someone on something they already see everyday, i.e. Instagram, Facebook, Twitter, etc.
Atara: Plus we have cool dudes like you that like our music and help spread the word.

I had an artist tell me that if you’re not doing social media right, you’re not really trying. How important is social media, i.e. Twitter, Facebook, Instagram, etc. to you?
Jack: It’s very important, especially to those starting up. Like I previously stated, social media is going to be that conduit that brings the artist's work to someone that would most likely not seek it out themselves and end up becoming a fan once presented a piece of what they have to offer.
Atara: For bands these days it is everything. Your online presence has to be constant and entertaining, or you lose your fanbase. The more you do the more people start to pay attention. If you do little to nothing then you stop existing. You have to create that foundation because that is how the labels nowadays look for acts to sign. We as the band have to put in all the legwork first in order to garner that attention.

Does being a female-fronted act in the hard rock/metal world pose any unique problems?
Atara: Being a female in the music industry is hard. It is hard to get the respect we want. Most female musicians have to sink to that sex sells level to break out. In the hard rock/metal world it is even harder to get attention as a female because it is such a male driven type of music. Most women stick with the light pop rock music, so they aren’t there to support their fellow females. It takes a certain edge to gain respect in the hard rock/metal world. I don’t want to be seen as sexy and taken for granted- I don’t use sex as a selling point. I want the music to be what sells us. For the fans to actually listen to the music. That creates more of a challenge to gather attention. In the long run though it will be more rewarding.

Other than the release of the new album Recondition, what can we expect from Plastic Rhino in the near future?
Jack: Touring around California, writing more music, getting some music videos out there.

I always like to end on a lighter and somewhat silly note, so if you’ll indulge me:
Deserted island. Three albums. Go.
Jack: Led Zeppelin IV, Van Halen 1984, and Master of Puppets. The tapes my Dad and I would listen to on the way to see my grandparents’ in Newberry Springs, CA. (For those of you who don’t know, it’s a town outside of Barstow, halfway between Los Angeles and Las Vegas.)
A: Oh that is a tough one….Dark Side Of The Moon- Pink Floyd, Appetite For Destruction- Guns and Roses, Lullabies To Paralyze- Queens Of The Stone Age.

Los Angeles as La La Land. How much is hyperbole and how much is based in truth?
Jack: I’m born and raised here in LA. It is exactly that- a fantasy land for creative minds to play in. Some stick it out, most eventually leave. For me it will always be home.

What super power would you want and why?
Jack: The power to not use several dozen quotation marks in a single interview…
Atara: Ha! the power of time travel.

Dogs or cats?
Jack: I love all animals. Cats make great predators, but dogs steal my heart every time.
Atara: We do love our animals, and we rally for our animals. We will be rallying for Rhinos with this album. Still working out the details- but proceeds from album and merch sales will be donated to WWF to help with their Rhino conservation efforts.

What does rock need more of, cowbell or bagpipes?
Jack: Rock has had its fair share of both. Between “Don’t Fear The Reaper” and “It’s A Long Way to the Top (If You Wanna Rock ‘n’ Roll).” When you think of bagpipes, you immediately hear “Amazing Grace” at a funeral. Between that and the way it’s always droning with sound, it definitely has room to grow in the world of rock. Cowbell just reminds me of cutting tracks in the studio to a metronome.
Atara: I have a fever, and the prescription is cowbell!

Thank you for your time. Any parting thoughts?
Enjoy the music! Support your local bands.

Here is the video for "Big Man Baby" from their new album Recondition: