NFL Has Turned Its Attention to Fleecing Someone Besides the Fans

I haven't been an NFL fan for years. I'm still a fan of my favorite team. But will I consume anything the NFL shoves down my throat? Nope. Not even close. 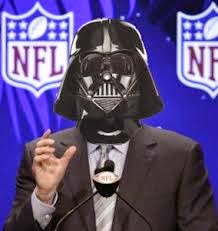 I kinda pay attention to what's going on throughout the league, but that's only because I'm in a Survivor Pool.

The NFL has been fleecing fans for years. Especially the season ticket holders.

Hey, maybe they should pay a fee for the privilege of being fleeced. Seat licensing? Check.

Those two home exhibition games that are pointless and poorly attended? Let's build that into the season ticket package. Check.

Football is best consumed on your couch or in your recliner on a nice TV from the comfort of your own home. Best television show going. That's a problem because you're not spending two weeks worth of grocery money on two beers and a hot dog. If those ingrates aren't gonna show up in person for the game, we won't let them see it at all. Blackout rules? Check.

Can we bilk them out of a little more? There's parking fees. Check.

What else? Whoa. They seem to catching on. Let's move on (until they forget). Hey, did you realize that ratings for the halftime show were better than overall ratings for the game?

Yeah, but it was a crappy game by the 2nd half. Many had tuned out. Keep that under your hat, there's another revenue stream to be had here. These artists get a boost in sales after the Super Bowl (it won't sustain, but it's real). They already play for free, but they should be paying us.

Don't you think ratings were so high during halftime because of who the artists are? I mean, we don't get the garage band from down the street.

Yep, that's right. The NFL wants to make the halftime talent make a "financial contribution" to the NFL. That's just a bit grotesque.

You know who I want to see at the 2015 Halftime Show? An empty stage. I know it won't happen. Someone will cave. But a guy can dream.
Posted by Michael Rauch at 11:16 PM